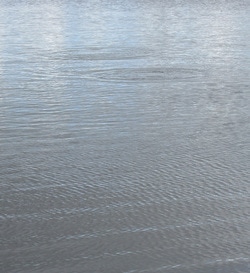 5 Sept 2018
I motored round to the other side of the peninsula. The boat was tucked well into the weeds, with the tree behind. First cast I rolled out a muddler and invicta, just getting ready to lengthen my cast when a cracking 2lb fish hurdled out of the water a few feet out from the boat. My muddler well secured in the corner of its mouth. After an explosive 5 min fight it was at the side of the boat. It was easily shaken off the barbless hook, and away it went. My cast was destroyed and I had to call it a night. 5 minutes fishing.
I saw no fish moving.
The catch returns showed 1s and 2s and a few blanks. The feeding in the water  is phenomenal. Every bit if weed is dripping with life so it is harder to tempt these fish. But still worth a try.  As the season progresses the best time has now moved to the middle of the day rather than the evenings according to the catch returns.


18 Aug 2018
I was looking forward to a great evening out following my last trip.
This time I saw nothing rose nothing. What a difference a few days make.
I did notice the water was well up and overflowing the outlet. The water was very dirty following a previous very windy day, and this may have contributed to the shock result.

16 Aug 2018
Again I only had a few hours and after bailing out the boats I had even less time. I hope you like the new spike for attaching the boat after bringing them in. I found it very useful. I hope you do as well.
Right from the start, I saw very good trout attacking minnows in the shallows, it turned around and went immediately after a daddy long legs that it had disturbed in the reeds. Followed by a flying leap towards another daddy. This was right beside the boats. It refused all my offerings and I never saw it again. A fish around 4 lbs.
I motored round the peninsula and the place was heaving with fish. In fact they were all over the place. I managed to winkle out 2 nice fish in my hours fishing spell. They rose, I cast, I caught. Great evening out. 20.00-21.00

03 Aug 2018
I only had a few hours but went up to the Corse house arriving around 8pm.
I fished my usual cast muddler droper and Silver invicta on the tail.
Second cast got me the first fish, a lively one pounder. It fought all the way to the boat and then fought with me in the boat. The silver invicta was the champion fly.
There was no rising fish to be seen. After about 21.00 fish started to move in very large numbers, but they were not taking anything i have to offer. With Dusk at 22.06 I called it a night. It looked like they were taking small grey buzzers. The other guy on the water also had one but lost some pretty big fish fishing from the bank  Anyway its just nice to be back out fishing and catching after such a long abstinence.

24 May 2018
I was up early in the evening to get the bottom of the next boat cleaned and inspected. There is some very deep gouges which will need filled before painting so will be out of commission for a while.
This is only apparent after the boat has been cleaned. The work took a lot longer than anticipated due to the distinct lack of members help. Thank fully one member and some Committee members also came out to help. It would have been a good time for our newer members to turn up and lend a hand and pick up some hints and tricks about fishing the waters. The timing couldn't have been more perfect. When I went out fishing after the work party, I had 9 good fish. This included one fish that had me stripped to the backing and surfaced 120 yards out. After 10 mins of coaxing it was in the shallow. If it had got off I would have sworn it was at least 10lb. It fought like a salmon. That was until i saw it in the  shallows. I could see it was only about 1 1/2Lb hooked just under the chin. The other boat had 2 and the bank angler  had 5 nice fish. This was in the space of an hour and a half.

11 May 2018
I went out in the boat. Even with the wind coming directly towards the boathouse so there weren't very many good drifts with wind from that direction. However I went out. The first fish came after the second cast. A very nice pound fish. Very strong fighter. Taking the size 14 claret bumble.  After a hour or so I was resolved to just the one. There were very few moving and very little fly life. As the evening progressed the wind dropped slightly and it was fish after fish after fish. Eight in total including a nice pound and half fish. Nothing was rising accept to my flies. The small claret bumble got them all. All others ignored.

08 May 2018
There was nothing much happening until the sun went down.
The evening rise was spectacular. Small black buzzers teased the fish to the surface and there were fish everywhere. I got 3 small stockies, but there were more than a few large zoo creatures rising.  If they were trying to rise gently it wasn't working. After the sun was away it got noticeably colder and the rise petered out. It would have been a fantastic dry fly evening for the purists out there.  It was nice to see a few other angler on the water. So a good few fish were caught.

03 May 2018
I could only manage a couple of hours and it felt even shorter after bailing the boats and preping the boat for painting.
It was blowing hard, cold and wet.
The sort of day you and many others would have thought no.
There is always a little sheltered spot and the dam wall ticked all those boxes.
After about an hour I saw a small black shape poking out he water then disappearing. Right in at the side amongst the rocks.
I cast parallel to the shore line with my flies just landing daintily on the water at that spot.
The water erupted. I' ve scare it I thought then I saw the line curving out away from the dam.
It was into a fiesty 1 and 1/2lb fish, which I called Biggles cos it was airbourne most of the time.
One fish, one take what a great evening out.

23 April 2018
The new stock are now in and they have stirred things up and are now well distributed. Fish were getting caught all over the Loch. The catches up till now have been very good with one angler getting 17 a couple of days ago. When I was up 21st April it was very bright an very few fish were showing. As the evening progressed There was a fanastic hatch of olives and the fish were taking then right in at the side in less than a foot of water. They weren't taking anything I had on, until I changed to an upwinged dry fly. I cast right over the top of a rising fish and just as the fly was landing out it came and grabbed it. A nice fish around the pound mark. I was sure it was one of last years stockies. They dont half fight. The was the only one. Plenty of fish moving but none taking.